Analysis of 338 companies (including Enel, Mastercard and Tesco) shows companies with ambitious science-based targets (SBTs) are delivering on Paris-aligned ambition, with emissions reductions at scale.

- SBTi companies deliver on emissions cuts: companies with science-based targets have reduced their combined emissions by 25% since 2015, contrasting with an increase of 3.4% in global emissions from energy and industrial processes over the same period.

- Target-setters are ahead of schedule: since setting a science-based target, a typical SBTi companyis reducing annual emissions at a rate that exceeds the rate needed to limit warming to 1.°5C according to pathways derived from climate scenarios. 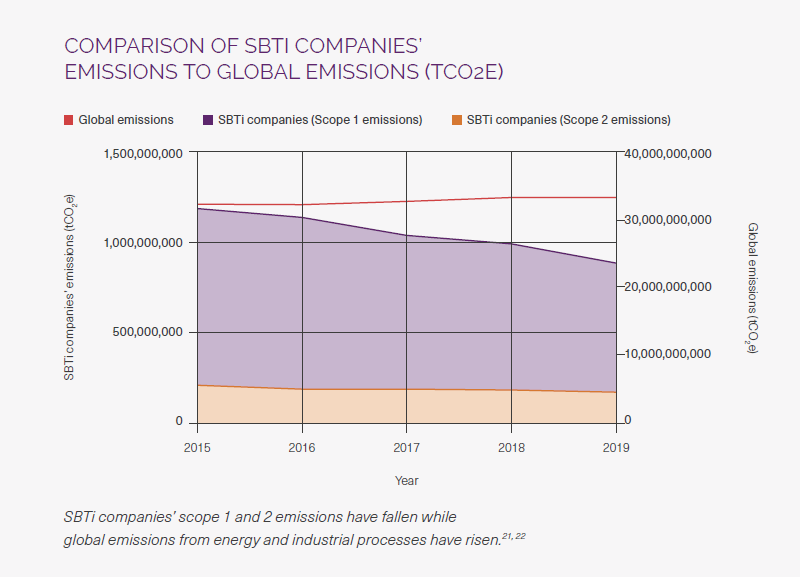 As global leaders gather for the UN’s Climate Adaptation Summit on climate resilience, new data published by the Science Based Targets initiative (SBTi) shows that companies with science-based targets are delivering on large-scale emissions reductions. Target-setting companies have successfully reduced their emissions by 25% since 2015, a difference of 302 million tonnes of CO2 equivalent, the same as the annual emissions from 78 coal-fired power plants.

Five years on from the Paris Agreement, the SBTi analysed the emissions of a group of 338 companies (including Enel, Mastercard and Tesco) whose climate targets have been approved by the SBTi as aligned with climate science and the goals of the Paris Agreement. This is the first ever study to look at how setting science-based targets correlates with corporate emissions reductions and the extent to which companies are actually delivering on those targets.

SBTi finds that the typical company with SBTs actually slashed direct (scope 1 and 2) emissions at a linear annual rate (6.4%) that exceeds the rate required under the SBTi’s criteria to meet 1.5°C-aligned warming scenarios (4.2%). This shows companies with SBTs are taking climate action at rates that not only meet, but are faster than, the pace of action required by the Paris Agreement. These figures compare to an average increase of around 0.85% per year in global emissions for energy and industrial processes over the same period (see Fig.1 graph below).

New research from the today suggests that the planned emissions savings of companies with science-based targets are also set to generate US$25.9 billion of new investment into climate mitigation initiatives in the next decade.

Alexander Farsan, Global Lead on Science Based Targets at WWF, one of the SBTi partners said:


“Today’s findings are a mark of progress at the beginning of a critical year for climate action. It shows that companies setting science-based targets are backing these commitments up with action - delivering the emissions reductions we know are vital if we want to meet the goals of the Paris Agreement. SBTi companies have cut their emissions by a quarter over the last five years - and we need more companies to follow in their footsteps. With COP26 on the horizon, now is the time for the private sector to step up to the plate and follow the science. If a company is genuine about protecting the climate, then it should be setting science-based targets.”

Today’s research also shows that, despite the challenges of COVID-19, 2020 was a milestone year for corporate climate commitments. Over 1,000 companies, making up 20% of global market capitalization, have now set, or committed to set, a science-based target. Companies that joined the SBTi in 2020 included Amazon, Facebook and Ford. The SBTi’s analysis finds that the rate of adoption of science-based targets doubled in 2020 versus the period 2015-2019, with over 370 companies joining the SBTi in 2020 at an average rate of 31 per month in 2020.

Additionally, more companies are now setting targets aligned with limiting global warming to 1.5°C than, for instance, a 2°C pathway or other type of target: 41% of all companies with science based targets have 1.5°C-aligned scope 1 and 2 targets.

Progress has been particularly strong in developed economies: in 16 OECD countries, a critical mass of 20% of high-emitting companies setting science-based targets has now been reached. In 2020, this 20% threshold was also reached in six new sectors, including the high-emitting and hard to abate cement and concrete sector. However, there is huge potential to further scale up ambition and improve progress in high-emitting sectors such as construction and automotives.

The global picture also shows commitments are lagging in some regions. In Europe, a critical mass of corporates with Paris-aligned climate commitments has been reached: 34% of all companies with the greatest climate impact have committed to, or set, SBTs in contrast to just 16% in North America and 12% in Asia.

Lila Karbassi, Chief of Programmes at the United Nations Global Compact, one of the SBTi partners, said:


“It is encouraging that, even in the midst of a global pandemic, corporate climate action soared in 2020. COVID-19 has revealed the vulnerability of our current economic model, and showed us that a coordinated global effort led by science is the only way out of such crises. We must channel these learnings into our collective response to the climate crisis. In many sectors and regions, we have reached a ‘critical mass’ of companies making meaningful commitments to reduce emissions, but this needs to be a global and sector-wide effort, supported by ambitious government policy, to truly build back better.”


"Since setting our science-based goals, we’ve started our transition to 100% renewable electricity across our own operations by 2030, introduced a new fleet of electric delivery vans in London as part of plans to go fully electric by 2028, and begun the rollout of the UK’s largest retail network of electric vehicle charging points across 600 of our stores.

We’ve also become the first retailer to issue a new corporate bond that is aligned to an agreed Sustainability Performance Target (SPT) of reducing Group greenhouse gas emissions by 60% by 2025 against our 2015 baseline. It's encouraging to see science-based target-setting correlating so strongly with emissions reductions and we hope to see more companies taking the urgent action needed to reduce environmental impact across all sectors, including food."


“Enel’s strategy and integrated business model place sustainability and the fight against climate change at their core. Setting science-based targets supports an ambitious decarbonization roadmap, clarifying the alignment with the Paris Agreement, and promotes a global net-zero energy system, while reinforcing the message that climate action is an investment through which we can make a meaningful impact, creating true shared value at the global level. If corporate strategies do not encompass targets as serious as SBTi ones, they do not go beyond lots of talk and a badge of cinematic fame. #NoSBTiNoParty”

"This will be a crucial year for climate action, and we believe the private sector has a vital role to play in the transition to a zero-carbon economy. That's why we updated our target with the SBTi and have aligned our ambition – across our whole value chain – with a 1.5C world. We are already making progress toward this target by focusing on key areas of our business, including decarbonization of our operations and supply chains, while also leveraging our technology and global network to make a positive impact on the environment at scale. Today's data shows that increasingly more corporates are stepping up their role in this collaborative effort to address the climate challenge - and as an SBTi company we're proud to be at the forefront of this change."