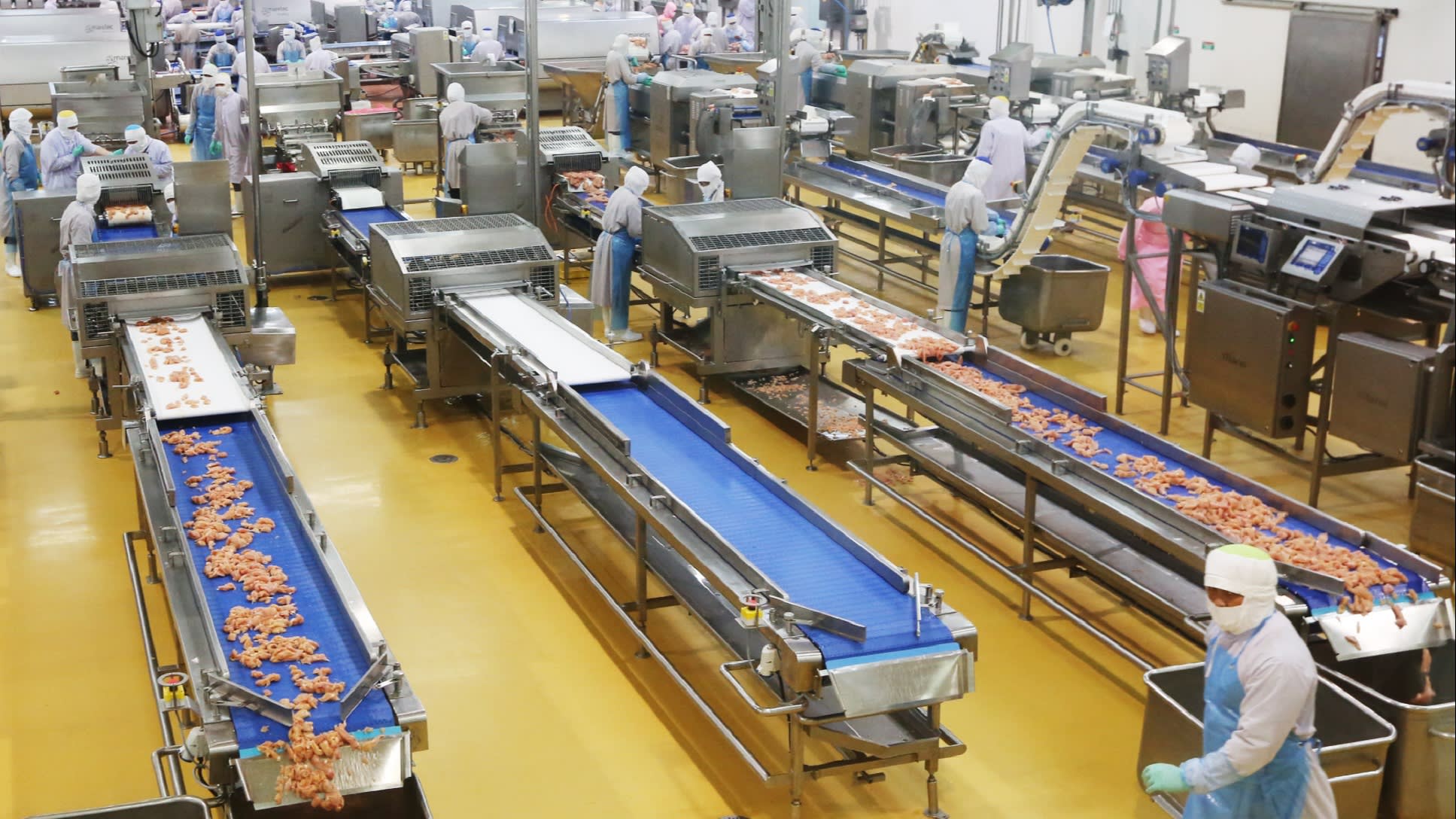 Big food processing operations, like this Charoen Pokphand Foods line in Thailand, are set to undergo changes to mitigate damage from disasters like the coronavirus pandemic. (Photo by Ken Kobayashi)

TOKYO -- After years of losing ground to health-conscious options and plant-based alternatives, canned meats are roaring back.

Bursts of panic buying since the coronavirus pandemic began have pushed shares of U.S. meat-processing giant Hormel close to an all-time high.

But ahead of a possible "second wave" of COVID-19 infections, Hormel, the producer of Spam and Skippy peanut butter, is reviewing its supply chain to be prepared.

"Two Asian facilities and our U.S. facility are having a difficult time keeping up with demand," said Michael J. Griesbach, director of Asia Pacific operations for the company, in an interview with the Nikkei Asian Review.

The company produces its canned-meats and shelf-stable products around the world, including China, Japan, the Philippines, Singapore and South Korea.

Due to the pandemic and other issues, the company wants more localized Asian production while diversifying away from mainland China, Griesbach said.

"We realize that we cannot rely on export from the Chinese market, at least not in the short- to medium-term," he added. "Having diversity in geographical production provides a key contingency for our role as a trusted supplier, as there is a risk of local crises."

Food-related companies in Asia and other parts of the world are reviewing supply chains as the coronavirus pandemic wreaks havoc on global consumption.

The outbreak has resulted in lockdowns in many countries, causing logistics disruptions worldwide. This has food companies worried about obtaining materials and ingredients for production, then bringing products to market, especially as a second coronavirus wave looms.

"What we will do is establish more small factories," said Prasit Boondoungprasert, CEO of Charoen Pokphand Foods, the food processing arm of Thailand's biggest agro-industrial conglomerate.

CPF mainly processes chicken, pork and shrimp at factories in 16 countries and regions outside Thailand, its largest base. These include China, Vietnam and India. With the exception of the latter, which remains under a protracted lockdown, the company has largely avoided damage.

Still, the company thinks its Thai factories may be too big and not nearly enough. "We will spread our factories across different areas," the CEO said, explaining CPF's domestic strategy of increasing the number of small facilities. If this works, it may do the same at its overseas units. This Smithfield Foods pork plant in the U.S., part of China's WH Group, was shuttered due to a rash of coronavirus cases among employees.   © Reuters

Since the coronavirus outbreak, many food companies in Asia have struggled to procure materials and ingredients, operate factories, and transport products because of lockdowns and other restrictions.

WH Group, the world's largest pork producer, is finding it hard to maintain production, forcing it also to rethink supply chains. The Chinese company closed its five production plants in the U.S. after a number of employees tested positive for COVID-19. It had been sending U.S.-produced meat to China as the African swine fever devastated Chinese production. But the pandemic changed this.

In some countries, the coronavirus has convinced governments to impose controls on agricultural exports, further hammering supply chains. In early April, Vietnam and Cambodia restricted rice exports. As of early June, Myanmar still had similar restrictions in place, having introduced them in May.

Ukraine, one of the world's largest wheat exporting countries, is limiting shipments of the grain until the end of June. This could harm Indonesia, which is reliant on Ukraine for 22.8% of its wheat imports, according to the World Food Programme.

Adhi Lukman, chairman of the Indonesian food and beverage employers association, told a hearing with lawmakers that the entire supply chain of the food and beverage industry has been affected by the pandemic. The contagion has also caused a slowdown in the shipping industry, he added.

Vietnam's exports of seafood and similar products slumped 11.2% in value during the January-March quarter compared with the same period last year, those of vegetables and fruits declined 11.5% while coffee dropped 6.4%. Minh Phu Corp, one of the country's biggest shrimp suppliers serving about 50 markets worldwide, posted 1.8 trillion dong in sales in the first quarter of 2020, down 15% from last year. Its net profit was 137 billion dong, down 34%.

Chinese suppliers have played a significant role in numerous food companies throughout Asia due to their low production-per-unit cost. But despite China having recovered from the coronavirus pandemic earlier than other nations, "many businesses in Asia are seeking decentralization from China to Southeast Asian countries such as Thailand, Malaysia and Vietnam," Nobuhiro Tsunoda, chairman of consultancy EY Japan Tax, told Nikkei.

A large Japanese beverage company that declined to be named is considering whether to diversify procurement of antihepatotoxic substances such as vitamin C, widely used in nonalcoholic drinks. The company, which currently relies on China for these ingredients, is mulling whether to source from other countries, perhaps in Southeast Asia, to defray the "risk of relying on one country." It also wants to build up stocks of the substances in case of further emergencies.