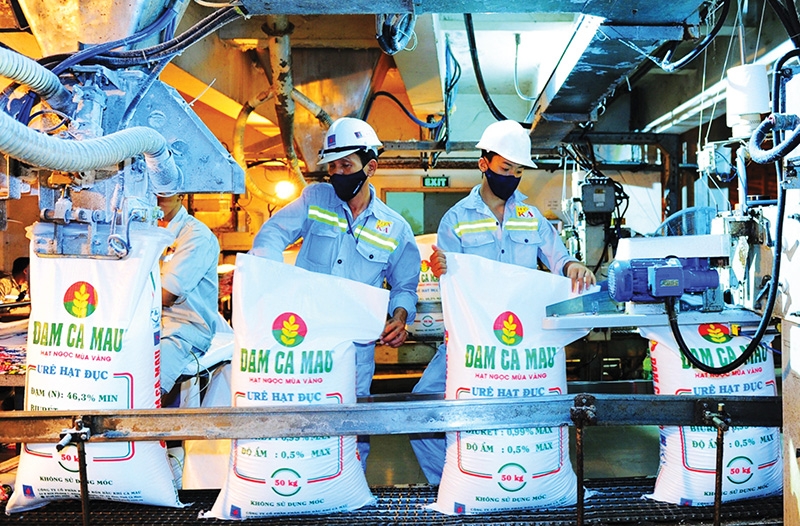 High fertiliser prices are directly affecting the income of many durian growers in the southern province of Dong Nai. At the beginning of this year’s crop, durian could fetch a good price on the market. However, the family of Nguyen Thi Thuy – who owns more than two hectares of fruit tree plantation in Dinh Quan district’s Phu Cuong commune – still made losses. Thuy said that high fertiliser prices and scattered harvests due to erratic weather have led to this situation.

From the beginning of the year, global fertiliser prices increased, also pulling up the domestic equivalents. Nguyen Thi Hien, deputy general director of PetroVietnam Ca Mau Fertiliser JSC, found that the fact that farmers were hoarding urea fertilisers for sowing in the third crop period pushed the price of urea to a higher level. Hien also explained that the demand for urea in the last rice crop increased by 30 per cent compared to the same period last year.

Fertilisers are currently in a bullish cycle, which pushes production costs also to a higher level, creating an additional burden on agricultural production amid already existing output difficulties caused by the global health crisis. Fertilisers and pesticides account for about 30 per cent of agricultural production costs and are increasingly rising due to chain effects caused by climate change.

In addition, China has officially imposed a fertiliser export tax of up to 30 per cent which is also affecting these essential products’ prices in Vietnam. China is the largest fertiliser exporter to Vietnam, making up a stunning 46 per cent of all fertiliser imports in the first four months of this year.

Phung Ha, general secretary of the Vietnam Fertiliser Association, confirmed that the prices of fertilisers and raw materials for the production thereof increased sharply from last December to June – raw materials such as urea increased by 62 per cent, diammonium phosphate (DAP) increased by over 54 per cent, and potassium increased by 45 per cent. Ha also believed that the price hikes in the domestic market have been linked to global trends as Vietnam’s economy significantly depends on imports and exports.

Thus, domestic prices are gradually adjusting to global prices when there is a shortage of supply in the domestic market, a representative of PetroVietnam Fertiliser and Chemical Corporation commented. According to him, even with locally backed fertilisers that can be fully produced in the country, streams of goods will flow abroad to markets with higher prices when domestic prices are low.

One fact the Ministry of Industry and Trade (MoIT) is trying to protect: the fertiliser demand has not fluctuated too much compared to previous years. Prices for imported raw materials and fertilisers increased by about 150 per cent while domestically produced goods increased by 130 per cent. Currently, domestic DAP and similar products are sold for up to $455 per tonne, while imported variants are traded for around $650 per tonne. Similarly, the price of urea produced by domestic factories is also about VND500 (2 US cents) per kilogramme lower than the price of imported fertilisers.

Meanwhile, none of the factories producing DAP and MAP is running at full capacity. Specifically, DAP Dinh Vu JSC last year only made around 207,000 tonnes while the factory’s designed capacity stands at around 330,000 tonnes per year. DAP No.2 Vinachem JSC also merely produced 260,000 tonnes with a designed capacity equal to that of the former. Meanwhile, Duc Giang Chemical Group JSC currently has an output of 100,000 tonnes per year. Apart from not running at full capacity, all three companies are also exporting their fertilisers to foreign markets.

In Vietnam, urea production projects receive incentives from the government’s fertiliser price stabilisation programme, so that the input materials of major manufacturers are not subject to global fluctuations from transportation fees to lack of supply.

As all urea production is concentrated in the hands of 3-4 factories, it has given them a great business advantage, even letting them control the market. With a designed capacity of about 2.7 million tonnes, Vietnam is completely self-sufficient in urea production, but still must import other fertilisers.

However, from the beginning of the year, the sources for imported fertilisers have declined sharply compared to the same period last year because the MoIT continues to impose safeguard duties on imported DAP and MAP fertilisers.