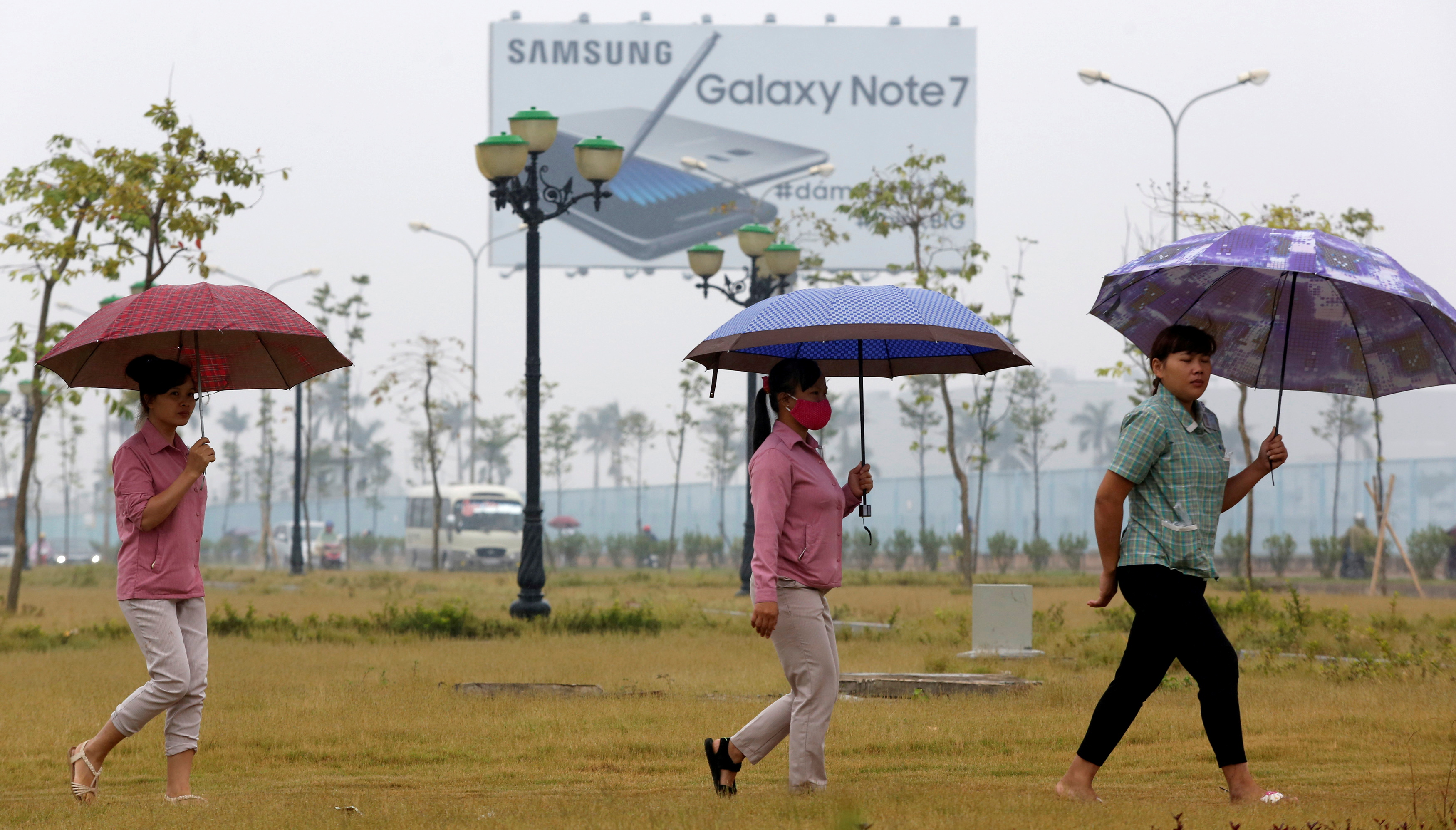 Employees pass a billboard advertisement for the Samsung Galaxy Note 7 on the way to work at the Samsung factory in Thai Nguyen province, north of Hanoi, Vietnam October 13, 2016.

After successfully containing the new coronavirus for most of last year, Vietnam is now battling an outbreak that is spreading more quickly. More than 3,000 people have been infected in 30 of its 63 cities and provinces since late April.

The capital Hanoi, and the southern business hub of Ho Chi Minh City, have shut restaurants and banned public gatherings.

Four business sources said their operations had been affected as some areas have entered lockdown, raising concerns about supply chain disruption.

A source at one Apple supplier said the company had split its workforce over two shifts, describing it as a "temporary solution, for maybe two weeks."

"Otherwise, the supply chain will be more or less disrupted," said the source, who requested anonymity because they were not authorised to speak to the media.

Vietnam's health ministry said on Friday it had begun vaccinating workers in Bac Ninh and Bac Giang, the two provinces most affected by the new outbreak.

At least 1.04 million people in Vietnam have had one dose of COVID-19 vaccine, but just 28,529 have been fully vaccinated, according to official data.

Bac Ninh, where Samsung Electronics (005930.KS) has significant operations, imposed a curfew and other travel restrictions on Tuesday, state media said. Vietnam accounts for half of Samsung's global phone and tablet production, according to the government.

A human resources manager at an electronic parts manufacturer in Bac Ninh said workers were living and working within the industrial zones, with office space temporarily converted into worker accommodation.

"We're working on a longer-term plan too since we have no choice but to live with the virus," said the manager, who also requested anonymity.

Vietnam has said it will stick to its dual goals of virus containment and economic development. On Wednesday, the government said it would gradually reopen four industrial parks that were closed a week earlier because of the latest outbreak.

The resumption of production at the industrial parks is part of state efforts to "ensure worker income, attract more investment in industrial parks, and contribute to socio-economic development."

Hong Sun, Vice Chairman of the Korean Chamber of Business in Vietnam (KORCHAM), said some of the lower-tier vendors which supply South Korea's major tech firms were struggling.

"Small to medium-sized enterprises in Bac Ninh and Bac Giang provinces are finding it challenging to operate. It seems many Korean businesses, including big shots like Samsung, could face difficulties very soon if more stringent measures are applied,” Hong told Reuters. "First-tier suppliers are not yet heavily impacted, but certain factories are slowing-down and suffering from the fourth wave of COVID-19 in Vietnam."

A separate person with direct knowledge of disruptions to the tech supply chain also said the restrictions placed on workers and local travel were taking a toll on some of the smaller suppliers in Vietnam.

In a statement, Samsung said it was fully abiding by the prevention measures put in place by local authorities.

"We are making every effort to protect the health and safety of all our employees, partners and customers, and minimise impact on our operations," it said.

An LG Electronics Inc (066570.KS) spokesman had no immediate comment. Apple and Foxconn did not immediately respond to a request for comment.